This page is a sub-page of our page on Entropy.

1.1. The Bateson entropy of the circumstances that influence our choices

A (psycho-social) hologram can be seen as a sense-making (= coherent) experience = a “coherence-twisted” product) of its participating perspectives (= reference beams = factors). In category theory this kind of construction is know as a “pull back limit”.

Generalized Bateson: Differences that make differences. The entropy of such difference-making schemes, will be called the Bateson entropy. Hence we make the following

Definition: The Bateson entropy (= bioentropy) of the resulting (output) differences is the pull-back limit (in a suitable cone-category) of the Bayesian entropies of the participating (input) differences.

is useful for modeling processes that lack memory, e.g., Markov processes without memory.

The “marriage” (according to Collingwood) of ecology and aesthetics:

“The patterns of epistemology and aesthetics do not flow easily into each other” (Harries-Jones (2010)).

What is the role of sign processes in a Unified Theory of Information?:

Information occurs when the system organizes itself in one way or another and, to use a semiotic term, ‘interprets’ the difference in its environment by virtue of its own activity. What does this mean? Is it justified to introduce a semiotic term (semiotics deals with semiosis which means sign processes)?

So we have a tripartite relation. Information is
• Something (the self-organized ordering);
• About another thing (the trigger), and;
• To a third thing (the system itself).

And this is exactly what, in semiotics, is understood by a sign.

On the one hand, the object bears significance to the subject insofar as its objective properties are able to suit subjective functions – this is called ‘affordance’ elsewhere (Gibson, 1979) – and, on the other hand, the subject designates the object for serving it one way or another because it needs to reach out for that which it makes into an object and needs to approach the object in a subjective way. In a different context this is called ‘appetence’.

It is in this very relationship that we find the origins of information: because of subjective appetence relating to objective affordance we have subjective signification relating to objective significance. ‘Signification’ and ‘significance’ descibe a field of latency for information to emerge. It is this relationship by which a subject relates itself to an object via its own activity from which information emerges.

Now we have to take into consideration that a subject never relates directly to an object. Its relation to the object is always mediated. It construes the means of mediation.

If we want to sketch this relationship in the traditional form of a semiotic triangle, we arrive at the following picture (Figure …): the subject (signator) generates and utilizes the sign. The object is that part of the relationship for which a sign is (to be) produced (signandum/signatum). And the sign is a product of the subject’s own activity that stands for the object (signans).

The triangle is made up of the three correlatives signmaker (signator), (to be) signified (signandum/signatum) and sign (signans). However, it has to be stressed that there is no relation between signandum/signatum and signans unless there is a signator that establishes the relation. It is even more important to point out that after the sign relation has been established, the signator’s interchange with the signatum is signans-mediated and henceforth channeled by the signans. The signans, once emerged, is the new quality that exerts dominance over the signator’s relation to the signatum.

It is worth noting that the triangle sketched here is different from the traditional semiotic triangle. Triadic semiotics in the tradition of Charles Sanders Peirce (1983, 2000) know the ‘object’, the ‘representamen’ (the sign in a narrow sense) and the ‘interpretant’, which is different from the interpreter and means the ‘meaning’ of the representamen. There are some current attempts at integrating the semiotics of Peirce into modern evolutionary though and modern systems thinking (e.g., Taborsky, 2001; The Danish school of Biosemiotics with Hoffmeyer, 1996; Emmeche, 1998; Brier, 1999 & 2008). This does not come as a surprise, as Peirce himself was an evolutionary thinker (Hausman, 1993).

In order, however, to be able to merge evolutionary systems thinking with semiotics we have to make use of the revised triangle. According to this, a sign is:
• Something;
• That stands for another thing, and:
• It does so to a third thing.

This is analogous to the tripartite definition of information.

Then we can proceed in saying that the something is the self-organized order of the system, the other thing is an event or a condition in the umwelt of the system, and the third thing is the respective evolving system.
And we can conclude that it seems sensible to use the terms ‘information’ and ‘sign’, as well as the terms ‘information process’ and ‘semiosis’ interchangeably.

When information makes a difference

///// Based on the article “When Information Makes a Difference” by Wolfgang Hofkirchner, the tripleC journal, Vol 11, No 1 (2013) 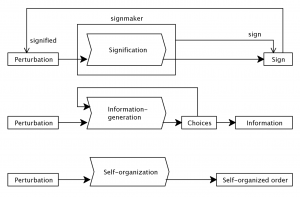 Perturbation: In system-theoretical terms, a perturbation is an objective event or entity that, potentially, might make a difference to a system’s requirements or goals. It actually makes a difference only if its objective significance is subjectively responded to by the system and a process (self-organisation) is implemented by which a signification (the build-up of order; the making of a sign) designates the perturbation from the system’s point of view.

Self organization: Self-organisation is the spontaneous build-up of order of, or in, complex systems far from their dynamical or chemical equilibrium. Self-organisation is the way systems come into existence or change their structure, state or behaviour and the way they maintain themselves (their structure, state or behaviour).

Self-organisation stands at the beginning of all information insofar as the system selects one of a number of possible responses to a causal event in its environment, shows preference for the particular option it chooses to realise over a number of other options, and decides to discriminate. Every system acts and reacts in a network of systems, elements and networks, and is exposed to influences mediated by matter and/or energy relations. If the effects on the system are fully derivable from, and fully reducible to, the causes outside the system, no informational aspects can be separated from matter/energy cause-effect relations.

In that vein, self-organising systems display information generativity. Information is produced in each self-organisation process. And, the other way round, Bateson’s idea can be interpreted as a step toward a complex systems view of information.

Choices: Machines do not choose. Claiming that they do would blur the distinction between the way mechanical devices work and the way systems endowed with subjectiveness (self-organising systems) act. At best we can say that probabilistic computing is a way to simulate less-than-strict deterministic processes of real-world systems; nonetheless, it is not exactly the way these processes work in the real world.

However restricted, computers nevertheless can make a difference. They can play an essential and indispensable part within self-organising (natural and social) contexts. Current computations find their raison d’etre in assisting, augmenting, supporting human information generation. We are in urgent need of tools that help intervene in the world we inhabit, for we have lost control of it (if we ever had it).

Given that complete control is out of reach, the aim is to regain the steering capability at least to the extent that a breakdown is avoided; this is to be achieved by keeping the frictions in, among and in between the social, natural and artificial subsystems of the emerging world society below the threshold of causing a breakdown.

The scientific-technological revolution we are witnessing provides the technology to decrease frictions appearing in the functioning of all systems.

Information is a valid concept in situations where the deterministic connection between cause and effect is severed, a system’s own activity comes into play, and the cause becomes the mere trigger of self-determined processes in the system, which finally lead to the effect, and the system makes a decision and a possibility is realised by an irreducible choice.

That is, information generation is a process that allows novelty to emerge. For that reason, it goes beyond a mechanical process that can be formalised, expressed by a mathematical function, or carried out by a computer.
Formalisation makes it possible to apply intellectual methods provided by formal sciences such as formal logic, mathematics, or computer science; these methods involve deducing a conclusion from its premises or calculating a result or a computer operation.

Due to their nature, however, these methods of mental transformation lead unequivocally from something that is given in the mind (as a starting point) to something that follows from it in the mind (as an end point). What works as a starting point is interpreted as a model of the cause in a real-world process; what plays the role of an end point is taken as the model of the effect. The whole transformation in the mind functions as a model of a causal relationship that is so by necessity and not contingent. These formal methods apply only in the case of a mechanical process. Mechanical processes can be mapped onto algorithmic procedures that employ clear-cut and unambiguous instructions conducted by computers as universal machines.

Like the underlying deduction procedures, mathematical operations on computers cannot reveal emergent processes in the object. Deductions, by definition, do not yield novelties. By definition, neither do algorithms or computation.

Information generation: Information is created if the number of effects exceeds that of causes in a system. Information occurs during the process in which the system exhibits changes in its structure, state, or behaviour, i.e., changes brought about by the system. Information is created by a system if it is organising itself at any level.
The paradigm shift from the mechanistic worldview cognisant of objects only toward a more inclusive view of a less-than-strict, emergent, and even creative universe inhabited by subjects too, gives us the tools to connect the notion of information to the idea of self-organisation.

The idea of systems intervening between input/cause and output/effect and thus breaking up the direct cause-effect-relationships of the mechanistic worldview facilitates, if not demands, the notion of information.
Self-organising systems that transform the input into an output in a non-mechanical way, that is, in the context of an amount of degrees of freedom undeniably greater than that of a one-option only, are subjects. And each activity in such a context equates with the generation of information: the act to discriminate, to distinguish, to differentiate, is information.

In the terms of triadic semiotics, the self-organising systems, by doing so, assign a signification to the order and make it a sign, which stands for the so signified perturbation.

Sign: The bipartite signification-significance relation between the system and the perturbation is replicated, becomes independent, takes on a life of its own, when becoming reified in the sign and thus upgraded to a tripartite relationship.