This page is a sub-page of our page on Geometry.

Positions and their Displacements: 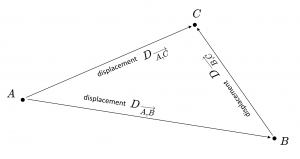 Positions and Displacements – and their representations as
position vectors and displacement vectors: 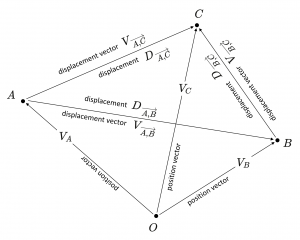 The question of how to obtain a rigorous approach to affine geometry arises. We choose to base our axiom system on linear algebra, that is, on the theory of vector spaces. First, let us discuss, on an intuitive level, the connection between plane affine geometry and vector spaces. What is the intuitive notion of the affine plane \, P \, over the field of real numbers? The points of \, P \, can be viewed as the points of any physical plane. If we fix a particular point \, 0 \, of \, P , we can construct a vector space in a natural way. The vectors are the ordered pairs \, (0, A) \, where \, A \in P \, and we picture such a vector as an arrow from \, 0 \, to \, A \, , see Figure 2.1: 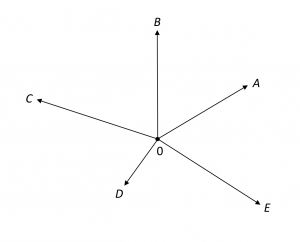 We often write \, A \, for the vector \, (0, A) , but this can only be done if it is clear from the context which point is being used as \, 0 , that is, as the common initial point of the vectors. Vectors are added in the usual way by “completing the parallelogram” and we perform scalar multiplication by stretching or contracting the vector in the proper direction. Both operations are pictured in Figure 2.2:

Thus we have associated a real, two-dimensional vector space with the real affine plane. The main thing to realize is that the construction of this vector space is based solely on notions of parallelism, that is, on affine concepts, and not on Euclidean concepts such as distance. However, this vector space is not unique because it depends on the choice of the point \, 0 \, in \, P . It is true that a different point \, 0' \, gives rise to an isomorphic vector space, but it is equally true that the vector spaces coming from \, 0 \, and \, 0' \, are not identical. The ordered pair \, (0, A) \, is not the same as the ordered pair \, (0', A) .

There is also a unique vector space, not depending on the choice or a point, associated with the affine plane \, P . This is the vector space of the translations of \, P \, onto itself. Again, it is important to realize that translations and their compositions can be defined in terms of the notions of parallelism alone. 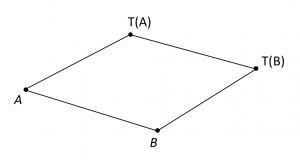 In mathematics, affine geometry is what remains of Euclidean geometry when not using (mathematicians often say “when forgetting”) the metric notions of distance and angle.

As the notion of parallel lines is one of the main properties that is independent of any metric, affine geometry is often considered as the study of parallel lines. Therefore, Playfair’s axiom (given a line L and a point P not on L, there is exactly one line parallel to L that passes through P) is fundamental in affine geometry. Comparisons of figures in affine geometry are made with affine transformations, which are mappings that preserve alignment of points and parallelism of lines.

Affine geometry can be developed in two ways that are essentially equivalent.

• In synthetic geometry, an affine space is a set of points to which is associated a set of lines, which satisfy some axioms (such as Playfair’s axiom).

• Affine geometry can also be developed on the basis of linear algebra. In this context an affine space is a set of points equipped with a set of transformations (that is bijective mappings), the translations, which forms a vector space (over a given field, commonly the real numbers), and such that for any given ordered pair of points there is a unique translation sending the first point to the second; the composition of two translations is their sum in the vector space of the translations.

In more concrete terms, this amounts to having an operation that associates to any ordered pair of points a vector and another operation that allows translation of a point by a vector to give another point; these operations are required to satisfy a number of axioms (notably that two successive translations have the effect of translation by the sum vector).

By choosing any point as “origin”, the points are in one-to-one correspondence with the vectors, but there is no preferred choice for the origin; thus an affine space may be viewed as obtained from its associated vector space by “forgetting” the origin (zero vector).

• Edwin B. Wilson & Gilbert N. Lewis (1912). “The Space-time Manifold of Relativity. The Non-Euclidean Geometry of Mechanics and Electromagnetics“, Proceedings of the American Academy of Arts and Sciences 48:387–507.

• Synthetic Spacetime, a digest of the axioms used, and theorems proved, by Wilson and Lewis. Archived by WebCite

3. A CONCRETE MODEL FOR AFFINE SPACE:

Exercise: Verify that \, (V, V, k) \, , as defined above, is a model for \, n -dimensional affine space. In other words, prove that the three conditions of Definition 6.1 are satisfied.

From our intuitive notion of translations, we certainly expect each translation to be a one-to-one function of \, X \, onto \, X . This fact is indeed true; we shall eventually prove much more about the set of translations. 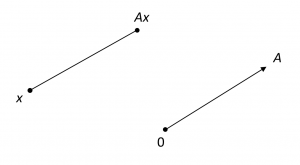 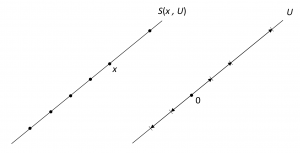 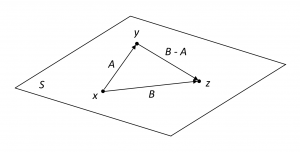 The term “affine subspace” will now be justified by showing that an affine subspace is an affine space in its own right. For convenience we often write \, S \, for \, S(x, U) \, when there is no danger of confusion. 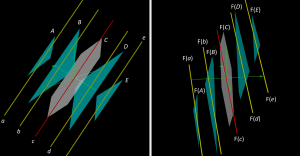 This picture shows the linear space probe used to explore the rank-nullity theorem of a linear transformation.

In the probe, the red centre line and the grey centre plane form linear subspaces, while the yellow lines and the light-blue planes form affine subspaces. Hence, from the relationship between of affine geometry and Euclidean geometry (discussed above) we can conclude that:

• if the tips of two displacement vectors lie on the same yellow line,
then the direction vector of their difference lies in the red centre line.

• if the tips of two or more displacement vectors lie on the same light-blue plane,
then the direction vectors of their pairwise differences lie in the grey centre plane.

Geometrically, the take-away lesson from this discussion is that:

• A displacement vector represents a change of position called a translation.

• The difference between two displacement vectors is a direction vector.