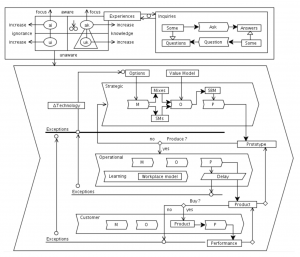 The PLPF (Professional Learning Process Framework) of PROLEARN D1.10 delinearized the traditional SECI-model of Nonaka by “breaking out” the EI loop of Externalization and Internalization) which goes on all the time. The activities (and attention) of this loop were then distributed across the parallel processes of C and S (Combination and Socialization) but which could just as well be interpreted as explicit and tacit, formal and informal, conscious and subconscious, etc, …).

In a similar way, the EE(S+O+C)(M+O+P) model delinearizes the EMEMO model by breaking out the EE loop, which goes on all the time, and which guides and controls the other processes by distributing its corresponding attention/comprehension across the (Strategic + Operational + Customer) activities of a company X. Moreover, each of these levels are then addressed by a (Mix+Optimize+P) process, where the P stands for Prototype at the Strategic level, Produce at the Operational level, and Perform at the Customer level of company X.

The Ericsson AXE10 Delay:
Prior to its introduction in 1976 the Ericsson AXE10 switchboard was delayed, due to a delay in the production of one of its key components. This raised an exception at the operational level (in the “Produce” stage of the M+O+P process. This “delay-exception” was then mapped to the strategic level and turned into an opportunity for Ericsson to review the options for substituting the delayed component with something better.

Due to the rapid advance of digital technology – represented by the box ∆Technology in Figure 7, Ericsson decided to delay a bit further and redesign the switchboard in order to replace the delayed component with a digital version that had a much larger capacity. When the AXE10 came on the market a year later than initially planned, it “slaughtered” the competition by displaying vastly superior performance. In fact, the AXE10 switchboard became one of the most successful products in the history of Ericsson.

Using business algebra, the supply chain of a company can be modeled as a a sequence of relational threads (= chains of relationships). 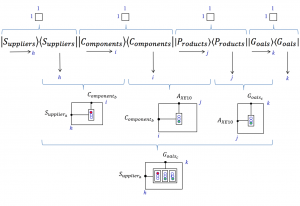 This figure shows the top-level Ericsson supply chain product as a formal matrix product of traffic lights, each one dynamically controlled by some form of change management process. In this way a company can have dynamic control over each separate path and manage its interactions with others more effectively and efficiently. As described above, one of the components, called \, {C_{omponent}}_b \, in the figure, of the (at that time) soon-to-be-released switchboard was red-flagged for delay by the corresponding supplier, called \, {S_{upplier}}_a \, . This red flag is reflected in the switch to red of the left-most factor of the sequence of traffic lights displayed at the bottom of the figure.

at the next level of detail. The traffic lights have been expanded to state diagrams that model not only that – but also under what conditions – the switch from green to red is occurring. 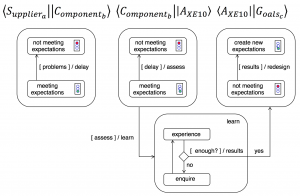 As seen in this figure, the dynamic interactions are handled by message passing between state diagrams in accordance with the Unified Modeling Language.

This delay message is picked up by the middle factor diagram (which is owned by Ericsson) and causes a transition from the state “meeting expectations” to the state “not meeting expectations” regarding the launching of \, A_{XE10} \, . This transition, in turn, generates an “assess” message that initiates a learn loop consisting of “enquire” and “experience” – in order to figure out how best to handle the new situation.

When [enough] has been learned in order to carry out the assessment of the available options, the results of this learn loop are passed to the right-most factor diagram, which relates the \, A_{XE10} \, to the \, {G_{oal}}_c \, for it. These results in turn trigger a “human transition” from “not meeting expectations” to “create new expectations,” a transition that sends a “redesign” message (not shown in the figure), which is presumably picked up by the corresponding Ericsson R&D teams – the teams that created the game-changing digital switchboard that was released about a year later (1976).

11 thoughts on “The Ericsson AXE10 Delay”