This page is a sub-page of our page on New Foundations for Classical Mechanics.

Chapter 3: Mechanics of a Single Particle

Most of the results of Chapter 2 will be used in this chapter in one way or another. Of course, the main mathematical tool will be the geometric algebra of physical space. Since the reader is presumed to have some familiarity with mechanics already, a number of basic terms and concepts will be used with no more than the briefest introduction. A critical and systematic analysis of the foundations of mechanics will be undertaken in Chapter 9. General methods for solving differential equations will be developed as they are needed.

Although only the simplest models and differential equations are considered in this chapter, the results should not be regarded as trivial, for the simple models provide the starting point for the analyzing and solving of complex problems. Consequently, the time for developing an elegant formulation and thorough analysis of simple models is time well spent.

Isaac Newton (1642 – 1727) is rightly regarded as the founder of the science called mechanics. Of course, he was neither the first nor the last to make important contributions to the subject. He deserves the title of “founder”, because he integrated the insights of his predecessors into a comprehensive theory. Furthermore, he inaugurated a program to refine and extend that theory by systematically investigating and classifying the properties of all physical objects. Newtonian mechanics is, therefore, more than a particular scientific theory; it is a well-defined program of research into the structure of the physical world.

This section reviews the major features of Newtonian mechanics as it stands today. Naturally, a modern formulation of mechanics differs somewhat from Newton’s but this is not the place to trace the intricacies of its evolution. Also, for the time being we take the fundamental concepts of space and time for granted, just as Newton did in his Principia. It will not be profitable to wrestle with subtleties in the foundation of mechanics until some proficiency with the mathematical formalism has been developed, so we delay the attempt until Chapter 9.

The central hypothesis of Newtonian mechanics is that variations in the motion of a particle are completely determines by its interactions with other particles. More specifically, the motion is determined by an equation of the general form

where \, \ddot{\bold x} \, is the acceleration of the particle, the scalar \, m \, is a constant called the mass of the particle, and the force \, \bold f \, expresses the influence of other particles. This hypothesis is commonly referred to as “Newton’s second law of motion”, though it was Euler who finally cast it in the form we use today.

Newton’s Law (1.1) becomes a definite differential equation determining the motion of a particle only when the force \, \bold f \, is expressed as a specific function of \, \bold x (t) \, and its derivatives. With this much understood, the thrust of Newton’s program can be summarized by the dictum: focus on the forces. This should be interpreted as an admonition to study the motions of physical objects and find forces of interaction sufficient to determine those motions. The aim is to classify the kinds of forces and so develop a classification of particles according to the kinds of interactions in which they participate. The classification is not complete today, but it has been carried a long way.

Newton’s program has been so successful largely because it has proved possible to account for the motions of physical objects with forces of simple mathematical form. The “forces of nature” appear to have two properties of such universality that they should be regarded as laws, though they were not identified as such by Newton. We shall refer to them as the principles of additivity and analyticity.

According to the principle of additivity (or superposition) of forces, the force \, \bold f \, on a given particle can be expressed as the vector sum of forces \, {\bold f}_k \, independently exerted by each particle with which it interacts, that is

This principle enables us to isolate and study different kinds of forces independently as well as to reduce complex forces to a superposition of simple forces. Newton’s program could hardly have progressed without it.

According to the principle of analyticity (or continuity), the force of one particle on another is an exclusive, analytic function of the positions and velocities of both particles. The adjective “exclusive” means that no other variables are involved. The adjective “analytic” means that the function is smoothly varying in the sense that derivatives (with respect to time) of all orders have finite values. The principle of analyticity implies that the force \, \bold f \, on a particle with position \, \bold x = \bold x (t) \, and velocity \, \dot {\bold x} = \dot {\bold x} (t) \, is always an analytic function

where the explicit time dependence arises from motions of the particles determining the force. Notice that the force is not a function of \, \ddot{\bold x} \, and higher order derivatives. An exception to this rule is the so-called “radiative reaction force” which requires special treatment that we cannot go into here. Mathematical idealizations or approximations that violate the analyticity principle are often useful, as long as their ranges of validity are understood.

According to the fundamental law of mechanics, a particle subject to a constant force undergoes a constant acceleration. For a force per unit mass \, \bold g , the particle trajectory \, \bold x = \bold x (t) \, is determined by the differential equation

subject to the initial conditions 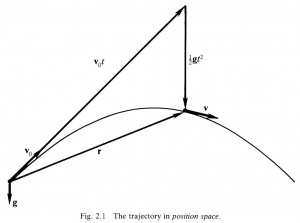 Accordingly, the constants in (2.4) determine a “natural” coordinate system for locating the particle at any time; the origin is determined by \, {\bold x}_0 , while coordinate directions and scales are given by the vectors \,{\bold v}_0 \, and \bold g . This is a skew coordinate system, but the particle’s natural position coordinates \, t \, and \, \frac {1}{2} \bold g \, t^2 \, are obviously quadratically related, just as they are in the familiar representation by rectangular coordinates. 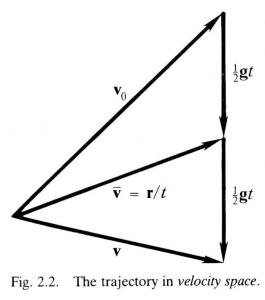 As illustrated in Figure 2.2, the trajectory \, \overline{\bold v} (t) \, is simply a vertical straight line beginning at {\bold v}_0 . Figure 2.2 also shows the simple relation of the average velocity (2.5) to the actual velocity (2.3), a relation which is disguised if the equation for displacement (2.4) is used directly. Figure 2.2 contains all the information about the projectile motion, so all questions about the motion can be answered by solving the triangles in the figure, graphically or algebraically, for the relevant variables. Let us see how to do this efficiently.

Although the displacement \, r = | \, \bold r \, | \, is represented only indirectly in velocity space, it is nonetheless easy to compute. Consider, for example, the problem of determining the range \, r \, of a target sighted in a direction \, \hat{\bold r} , which has been hit by a projectile launched with velocity \, {\bold v}_0 . This problem can easily be solved by the graphical method illustrated in Figure 2.2, assuming, of course, that the flight of the projectile is adequately represented as that of a particle with constant acceleration \, \bold g . The method simply exploits properties of Figure 2.2. 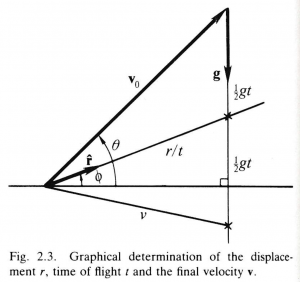 From this we can conclude that 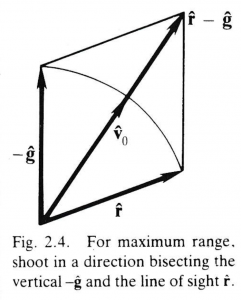 Substituting (2.11) in (2.8), one immediately finds the following expression for the maximum range:

We saw in Section 2-6 that this is an equation for a paraboloid of revolution; here, it expresses \, r_{max} \, as a function of the target direction \, \hat{\bold r} . As illustrated in Figure 2.5, the paraboloid is the envelope of all trajectories emanating from the origin with the same initial speed \, v_0 . Thus, only points under the paraboloid can be reached by a projectile. 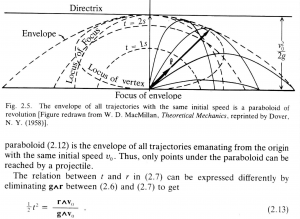