This is a sub-page of our page on Algebra.

Sub-pages of this page

The Applications of Matrices | What I wish my teachers told me way earlier
(Zach Star on YouTube):

Elimination can simplify, one entry at a time, the linear system \, A x = b . Fortunately it also simplifies the theory. The basic questions of existence and uniqueness – Is there one solution, or no solution, or an infinity of solutions? – are much easier to answer after elimination. We need to devote one more section to those questions; then that circle of ideas will be complete. But the mechanics of elimination produces only one kind of understanding of a linear system, and our chief object is to achieve a different and deeper understanding. This chapter may be more difficult than the first one. It goes to the heart of linear algebra.

The valuable thing for linear algebra is that the extension to \, n \, dimensions is so straightforward; for a vector in seven-dimensional space \, \mathbf R^7 \, we just need to know the seven components, even if the geometry is hard to visualize.

Within these spaces, and within all vector spaces, two operations are possible:

We can add any two vectors and we can multiply vectors by scalars.

Normally our vectors belong to one of the spaces \, \mathbf R^n ; they are ordinary column vectors. The formal definition, however, allows us to think of other things as vectors – provided that addition and scalar multiplication are all right. We give three examples:

We now come to the key examples of subspaces. They are tied directly to a matrix \, A \, and they give information about the system \, Ax = b . In some cases they contain vectors with \, m \, components, like the columns of \, A ; then they are subspaces of \, \mathbf R^m . In other cases the vectors have \, n \, components, like the rows of \, A \, (or like \, x \, itself); those are subspaces of \, \mathbf R^n . We illustrate by a system of three equations in two unknowns:

If there were more unknowns than equations, we might expect to find plenty of solutions (although that is not always so). In the present case there are more equations than unknowns – and we must expect that usually there will be no solution. A system with \, m > n \, will be solvable only for certain right-hand sides, in fact, for a very “thin” subset of all possible three-dimensional vectors \, b . We want to find that subset of \, b ‘s.

One way of describing this subset is so simple that it is easy to overlook.

This description involves nothing more than a restatement of the system \, Ax = b , writing it in the following way:

These are the same three equations in two unknowns. But now the problem is seen to be this: Find numbers \, u \, and \, v \, that multiply the first and the second columns of \, A \, to produce the vector \, b . The system is solvable exactly when such coefficients exist, and the vector \, (u, v) \, is the solution \, x .

Geometrically, the general case is like Fig. 2.1 – except that the dimensions may be very different. We need not have a two-dimensional plane within three-dimensional space. Similarly, the perpendicular to the column space, which we drew in Fig 2.1, may not always be a line. At one extreme, the smallest possible column space comes from the zero matrix \, A = 0 . The only vector in its column space (the only combination of the columns) is \, b = 0 , and no other choice of \, b \, allows us to solve \, 0 x = b .

Any 5 by 5 matrix which is nonsingular will have the whole of \, \mathbf R^5 \, as its column space.

For such a matrix we can solve \, Ax = b \, by Gaussian elimination; there are five pivots. Therefore every \, b \, is in the column space of a nonsingular matrix.

You can see how Chapter 1 is contained in this chapter. There we studied the most straightforward (and most common) case, an \, n \, by \, n \, matrix whose column space is \, \mathbf R^n . Now we allow also singular matrices, and rectangular matrices of any shape: the column space is somewhere between zero space and the whole space. Together with its perpendicular space, it gives one of our two approaches to understanding \, Ax = b .

The Nullspace of \, A

The previous section dealt with definitions rather than constructions. We know what a basis is, but not how to find one. Now, starting from an explicit description of a subspace, we would like to compute an explicit basis.

Subspaces are generally described in one of two ways. First, we may be given a set of vectors that span the [sub]space; this is the case for the column space, when the columns are specified. Second, we may be given a list of constraints on the subspace; we are told, not which vectors are in the [sub]space, but which conditions they must satisfy. The nullspace consists of all vectors that satisfy \, Ax = 0 , and each equation in this system represents a constraint. In the first description, there may be useless columns; in the second description there may be repeated constraints. In neither case is it possible to write down a basis by inspection, and a systematic procedure is necessary.

The reader can guess what that procedure will be. We shall show how to find, from the \, L \, and \, U \, (and \, P \, ) which are produced by elimination, a basis for each of the subspaces associated with \, A . Then, even if it makes this section fuller than the others, we have to look at the extreme case:

To organize the whole discussion, we consider each of the four fundamental subspaces in turn. Two of them are familiar and two are new.

Using this terminology, the nullspace is the orthogonal complement of the row space: \, \mathscr{N}(A) = (\mathscr{R}(A^\text{T}))^{\bot} \, . At the same time, the opposite relation also holds: The row space contains all vectors that are orthogonal to the nullspace.

Since the last two numbers are unchanged when the new row \, z \, is added, it is impossible for the first one to change either. We conclude that every vector orthogonal to the nullspace is already in the row space: \, \mathscr{R}(A^\text{T}) = (\mathscr{N}(A))^{\bot} \, .

This completes the second half of the fundamental theorem of linear algebra. The first half gave the dimensions of the four subspaces, including the fact that row rank = column rank. Now we know that those subspaces are perpendicular, and more than that, they are orthogonal complements. 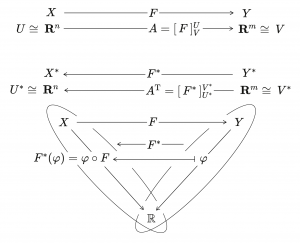 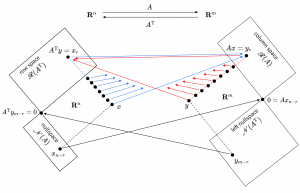 Figure 3.4 summarizes the fundamental theorem of linear algebra. It illustrates the true effect of a matrix – what is happening below the surface of the multiplication \, A x . One part of the theorem determined the dimensions of the subspaces. The key was that the row space and the column space share the same dimension \, r \, (the rank). Now we also know the orientation of the four spaces. Two subspaces are orthogonal complements in \, \mathbf R^n , and the other two in \, \mathbf R^m . The nullspace is carried to the zero vector. Nothing is carried to the left nullspace. The real action is between the row space and the column space, and you see it by looking at a typical vector \, x . It has a “row space component” and a “nullspace component,” \, x = x_r + x_{n - r} \, . When multiplied by \, A , this is \, A x = A x_r + A x_{n - r} \, :

Of course everything goes to the column space – the matrix cannot do anything else – and the figure shows how it happens.*

/////// Strang adds the following note at the bottom of the page:

* We did not really know how to draw the two orthogonal subspaces of dimension \, r \, and \, n - r . If you understand these dimensions, and the orthogonality, do not allow fig. 3.4 to confuse you!

Every matrix transforms its row space to its column space.