This page is a sub-page of our page on Research Areas.

• From Exploratorium to Explainatorium: The story behind our change of name
• Some of our earlier math education projects.

• Mathematics is Representation
• What is a Mathematician?
• What does it feel like to do Mathematics?
• What is the difference between Mathematics and Science?
• The historical struggle to get rid of meaning
• The Impossibility of Teaching Mathematics
• Math Makers versus Math Fakers
• Mathematical Courtesy

• The Teaching Gap : Best Ideas from the World’s Teachers for Improving Education in the Classroom, by James W Stigler and James Hiebert, 2009.
• MathRehab
• Situation Mathematics
• A Mathematician’s Lament by Paul Lockhart
• 2018 review of online learning: weak leadership (by Tony Bates)
• The coming calculus MOOC revolution and the end of math research,
by Math Babe, 20 January 2014.
• Politiken hotar Matematiken av Anders Björner et al.,
Svenska Dagbladet, Debatt, 2 sept 2009 (in Swedish).
• What happens when Math goes wrong? with Matt Parker.
• Things to do and see in the fourth dimension with Matt Parker.

Representation and Reconstruction of a Presentant with respect to a Background


IMPORTANT: Equality only holds if the representation is total. 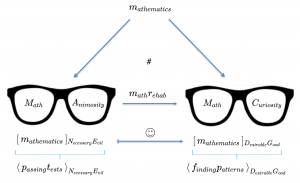 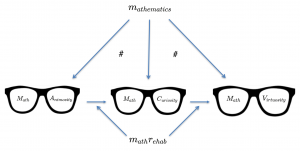 is a fitting name for my lifetime learning-and-teaching project in mathematics. In fact, it began when I started to teach mathematics at KTH in 1967 (at the age of 19). The opportunity to teach math and the challenges involved in trying to explain it to others – students who, back in the early years, were mostly my own peers – shaped my future teaching career.

During the first two decades I was mostly teaching regular courses, while increasingly trying to add my own personal touch to them – a touch that usually reflected my latest mathematical “love affair” as a graduate student.

My experiences at Ericsson – teaching object-oriented programming techniques between 1989 and 1999 – brought me into the field of modeling, and my engagement with NADA – teaching projective geometry at CVAP in 1984 and being part of developing a prototype called the “Garden of Knowledge” at CID in 1996-97 – led to the formation of the ILE (= Interactive Learning Environment) group at NADA which “morphed” into the KMR (= Knowledge Management Research) group at CSC (formely NADA) in 2001.

Looking back, I can say that during the last two decades I have been been working with some extremely talented people – both within and outside KTH. The KMR group has mainly been involved in projects at the European level, focusing on digital support for learning based on “knowledge pull” and distributed networks of digital (and non-digital) resources. In this work, mathematics has sometimes been used as a kind of testbed, as for example in the projects MathViz and Matriks. The unifying theme has been the “pedagogical elephant in the room” – namely interest.

From necessary evil to desirable good

Question: How can we contribute to diminishing the anxieties that stem from regarding mathematics as a necessary evil?

Answer: By promoting an attitude that regards mathematics more as a desirable good.

Such a shift of attitude would carry with it a change of of mental focus –
from “passing threatening exams” to “finding interesting patterns.”

The attitude of math anxiety is largely based on the fear of not passing tests and hence not beeing “good enough.” A radical approach would be to introduce a global ban on math tests – since they could be seen as a mental counterpart to nuclear tests.

A more pragmatic approach would be to provide new ways to recover from anxiety and rekindle interest. Sadly, a genuine interest in math cannot be established until the fear of math has disappeared, which normally cannot be achieved until the person is out of school and the math tests have disappeared for good.

Consequently, one important action to reduce math anxiety is to reduce the “bleeding” of confidence and self-esteem that results from not passing exams – failures that in themselves reinforce such anxieties. The Math Bandages project is designed to contribute to a stress reduction in such cases.

However, in the longer term, math bandages are not sufficient. One of the things that are needed in order to change the present attitude to math along the lines outlined above is stories that deal with interesting mathematical structures – and that deal with them in ways that are interesting enough to capture attention. This is no small challenge in an increasingly attention-driven economy, where the fights for our eyeballs and our eardrums continually serve to decrease our attention span as well as the cognitive complexity of our thinking.

We believe that such mathematical stories are possible to tell, and we have come across several excellent examples at channels such as YouTube. Some of these are embedded (= pointed to) in this Explainatorium – together with some stories that we have composed within our group.

As is discussed below, a major part of making a mathematical story interesting is to:

• explain the ideas involved (ideally on several levels of complexity).
• connect the dots between them, conceptually, historically, and culturally.

Promoting life-long learning based on interest by:

• visualizing the concepts.
• interacting with the formulas.
• personalizing the presentation.
• routing the questions to live resources.

improving the narrative by:
• showing before proving.
• proving only when the need is evident.
• focusing on the evolutionary history.

• Ideology: Within the math explainatorium project we want to emphasize the speculative and creative aspects of mathematics as a way to reconnect with your belief in your ability to think.

• Aim: To stimulate interest in mathematics among young and old by emphasizing “week-end mathematics”.

• Basic idea: Problematize and dramatize the major mathematical concepts by anchoring them in the history of ideas.

• Methdod: Improving the narrative – e.g., by showing without necessarily proving.

• Form: The news of yesterday: Proust: “In Search of Lost Mathematics.” Knowledge components (featuring Pythagoras, Archimedes, Newton, …) are “tied together” by a ”news anchor in space-time” who follows different trails along the evolution of mathematical ideas.

Some concrete examples of story-scripts based on this math-education ideology aiming at raising interest in mathematics can be found on our page about Mathematical Hikes.

Aiming to support a transformation from math fakers to math makers by contributing to:

(1) A “smorgasbord” of interest-provoking, First-Class Mathematics
with historical and cultural embeddings.

(2) A collection of Math Bandages that are helpful in passing higher-education exams
in mathematics for science, technology and engineering.

(3) An infrastructure that enables and promotes the evolution of
PeopleSMART learning environments within the STEM field.

• The Evolution of Geometric Arithmetic