This page is a sub-page of our page on Calculus of Several Real Variables.

A differential as an infinitesimal (≈ “infinitely small”) quantity

Rules for computing with differentials:

This is the kind of computation that Bishop George Berkeley (1685 – 1753), in his book The Analyst from 1734, described as “computing with the ghosts of departed quantities.”

NOTE: In this computation we have made use of the fact that,
if they are continuous, the mixed second partial derivatives are equal, that is

If the second partial derivatives are continuous, it follows that the Hessian matrix is symmetric, and therefore it has only real eigenvalues, and eigenvectors corresponding to different eigenvalues are orthogonal to each other. Moreover, any symmetric matrix is semi-simple.

A square matrix, (in other words the matrix of a linear operator T : V → V , with V a finite-dimensional vector space, is said to be simple if its only invariant subspaces under T are {0} and V itself.

If the field is algebraically closed (such as the complex numbers), then the only simple matrices are of size 1 \times 1 .

The concept of a differential form

For instance, the expression \, f(x) dx \, from one-variable calculus is an example of a differential 1-form, and can be integrated over an oriented interval \, [a, b] in the domain of \, f \, :

is a differential 2-form that has a surface integral over an oriented surface \, S \, :

The symbol \, ∧ \, denotes the exterior product, sometimes called the wedge product, of two differential forms. Likewise, a differential 3-form \, f(x, y, z) dx ∧ dy ∧ dz \, represents a volume element that can be integrated over an oriented region of space. In general, a \, k -form is an object that may be integrated over a \, k -dimensional oriented manifold, and is homogeneous of degree \, k \, in the coordinate differentials.

The algebra of differential forms is organized in a way that naturally reflects the orientation of the domain of integration. There is an operation \, d \, on differential forms known as the exterior derivative that, when given a \, k -form as input, produces a \, (k + 1) -form as output.

This operation extends the differential of a function, and is directly related to the divergence and the curl of a vector field in a manner that makes the fundamental theorem of calculus, the divergence theorem, Green’s theorem, and Stokes’ theorem special cases of the same general result, known in this context also as the generalized Stokes theorem. In a deeper way, this theorem relates the topology of the domain of integration to the structure of the differential forms themselves; the precise connection is known as de Rham’s theorem.

Differential forms provide an approach to multivariable calculus that is independent of coordinates.

Because \, d^2 = 0 , every exact form is necessarily closed. The question of whether every closed form is exact depends on the topology of the domain of interest. On a contractible domain, every closed form is exact by the Poincaré lemma. More general questions of this kind on an arbitrary differentiable manifold are the subject of de Rham cohomology, which allows one to obtain purely topological information using differential methods.

Note that the argument \, \theta \, is only defined up to an integer multiple of \, 2\pi \, since a single point \, p \, can be assigned different arguments \, r, r+2\pi , etc. We can assign arguments in a locally consistent manner around \, p , but not in a globally consistent manner. This is because if we trace a loop from \, p \, counterclockwise around the origin and back to \, p , the argument increases by \, 2\pi . Generally, the argument \, \theta \, changes by

over a counter-clockwise oriented loop \, S^1 .

Even though the argument \, \theta \, is not technically a function, the different local definitions of \, \theta \, at a point \, p \, differ from one another by constants. Since the derivative at \, p \, only uses local data, and since functions that differ by a constant have the same derivative, the argument has a globally well-defined derivative " d\theta ".

which by inspection has derivative zero. Because \, d\theta \, has vanishing derivative, we say that it is closed.

Differential forms in \, \mathbb{R}^2 \, and \, \mathbb{R}^3 \, were well known in the mathematical physics of the nineteenth century. In the plane, \, 0 -forms are just functions, and 2-forms are functions times the basic area element \, dx ∧ dy , so that it is the 1-forms

that are of real interest. The formula for the exterior derivative \, d \, here is

The gradient theorem asserts that a 1-form is exact if and only if the line integral of the form depends only on the endpoints of the curve, or equivalently, if the integral around any smooth closed curve is zero.

A vector represented in a tangent basis and its dual basis 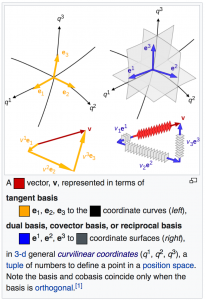 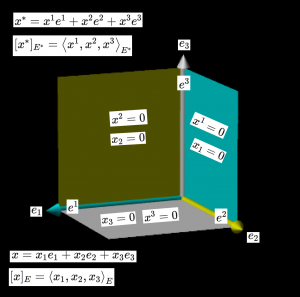 The dual basis measures the size of a vector along each of its dimensions
(Ambjörn Naeve on YouTube):

The interactive simulation that created this movie

The contravariant and covariant components of a vector 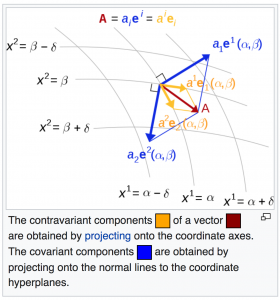 Basis and dual basis in a curvilinear coordinate system (Wikipedia) 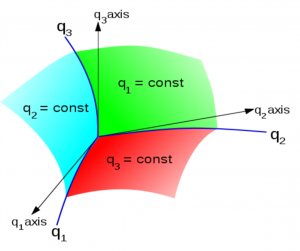 The coordinate curves intersect at the point 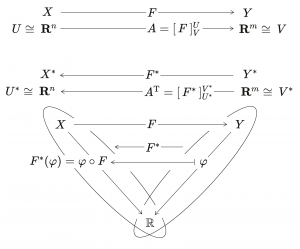 Linear transformations F and F* with matrices A and A^T