This page is a sub-page of our page on Stories.

• Flatland – the movie 2008, based on the novel Flatland by Edwin A. Abbott from 1884.
• Flatland – the limit of our consciousness
• A Wrinkle In Time, 2018 Disney film based on the novel by Madeleine L’Engle from 1962.
• How mathematicians are storytellers and numbers are the characters,
by Marcus du Satoy in The Guardian, 23 January 2015.
• Taxén, G., Naeve, A. (2001), CyberMath – Exploring Open Issues in VR-based Learning, SIGGRAPH 2001 Educators Program, In SIGGRAPH 2001 Conference Abstracts and Applications, pp. 49-51.
• Taxén, G., Naeve, A., (2001), CyberMath: A Shared Virtual Environment for Mathematics Exploration , Proceedings of the 20:th World Conference on Open Learning and Distance Education (ICDE-2001), Düsseldorf, Germany, April 1-5, 2001.

The interactive simulations on this page can be navigated with the Free Viewer
of the Graphing Calculator.

The Tesseract or HyperCube

The Triact or HyperSquare that explains the HyperCube (= Tesseract):

BACKGROUND AND HISTORY OF THE LINEAR WAR

Paradise: In the beginning of Vectoria, there was the free, additive group of vectors, happily adding themselves according to the rules of:

The snake: Enter the snake that tempts the happy ‘vector groupies’ in \, V \, to eat from the tree of knowledge regarding the action of a group (of scalars) on a set (of vectors). In this way, the vectors learn how to shrink and expand themselves through multiplication by scalars from a nearby ring or field \, \mathbb {R} . The snake performs this temptation by introducing the scalar action mapping:

The exclusion from paradise: This creates the knowledge among the vectors of the power of linear combinations. “And they saw that they were linearly combinable”. This insight leads to the rise of gangs of power-hungry vectors that try to control the free abelian group of additive vectors and turn it into a vector space by assigning to each vector the coefficients that express it in various linear combinations. The members of each gang fight among themselves to become as few as possible and still get the job done (just as corporations go through great trouble to eliminate redundant personnel). The surviving gang members are called basis vectors, and such a “minimal gang” is called a basis.

The sequence of coefficients of the unique linear combination that such a basis \, B \, can produce for each vector \, v \in V \, is called the coordinates of the vector \, v \, in the basis \, B .

Maximizing the efficiency of coordinatization: Some basis-gangs find it easier to coordinatize their subordinates than others. In fact, the computation of the coordinates become most simple if the corresponding basis-gang consists of orthonormal vectors. Such vectors are orthogonal, which means that their inner product with each other is zero, and that they have unit length.

For such an orthonormal basis, each coordinate of a vector can be computed directly by taking the inner product of this vector with the corresponding basis vector – instead of having to solve an entire system of linear equations – in order to obtain the value of each separate coordinate.

Using the inner product of \, V , non-orthogonal basis-gangs therefore try to reconfigure themselves to become orthonormal by the use of orthogonal projection. In particular, they make use of the Gram-Schmidt orthonormalization process to split a set of vectors into perpendicular (= orthogonal) components, and re-scale the length of each of these components to unity.

Space travel: The basis-gangs fight for domination among themselves until only one gang survives. This basis-gang pronounces itself as the basis-kings \, B . Having achieved domination on the initial planet \, V , the basis-kings decide to colonize another planet \, V' . They travel to \, V' \, and find that it is ruled by its own set of basis-kings called \, B' . In order to survive in \, V' , the basis-kings from \, V \, must submit to being coordinatized by \, B' , and they each get their coordinates tattooed into their skin.

Soon the immigrant basis-kings from \, V \, are plotting to overthrow the ruling basis-kings of \, V' . In order to build an army to back their case, they have to ship their subjugates from \, V \, over to \, V' . For this purpose they construct a special spaceship \, M \, – called a matrix – by aligning their own \, B' -coordinates in columns and send the matrix ship back to \, V . The basis-kings of \, V \, then command the citizens of \, V \, to line up at the space port – to be transported to \, V' \, through matrix multiplication by \, M . This means that each citizen of \, V \, gets its coordinate vector multiplied (from the left) by the matrix \, M \, and the resulting \, B' -coordinate vector determines its position as an ‘immigrant’ in \, V' .

Conflict among the immigrant kings: An internal conflict emerges among the immigrant basis-kings from \, V . There are now too many kings for unique coordinatization of their new subjects, since each king no longer commands his own separate dimension, which is independent from all the others – as they used to do back in \, V .

Surviving the space trip – or getting killed by the kernel: The surplus of immigrant kings becomes apparent when it is discovered that some of their subjects from \, V \, were killed
(i.e., mapped to zero) during their trip from \, V \, to \, V' . The investigation into these deaths is performed by computing the kernel of the space-travel-mapping described by the matrix \, M , which, from now, we will refer to as the mapping \, M: V \, \rightarrow \, V' . 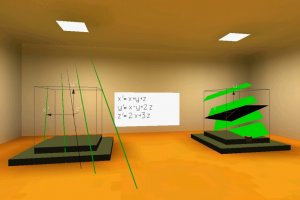 As a result of this conflict, some members of the basis-kings of \, V \, are eliminated (using the Gram-Schmidt process of orthonormalization), until the remaining kings become an orthonormal basis for the linear subspace that they span.

Traveling back to Vectoria to get help: The remaining immigrant basis-kings now form an orthogonal basis of their subspace in \, V' . They now make use of this to organize a trip back to their home planet \, V \, by constructing the pseudoinverse \, P: V' \rightarrow V \, of the space-travel mapping \, M: V \rightarrow V' .

In order to get everybody safely back from V'' to V the explorers now set out to discover an entrance to W from V''. They first experiment with direct mappings V'' \rightarrow V but they are unsuccessful, losing a couple of brave “kernel divers” in the process.

Then one of the researchers has a bright idea: “Why not try with mappings V'' \rightarrow V' and see if we can find a kernel that transports us back from V'' to V, just as the kernel of M: V \rightarrow V' transported us from V to V'' ?”

Gaming situation: On their search for the way back to earth, the crew of the spaceship Enterprise land on the planet Vectoria’ in the subspace occupied by the immigrated vectorians who greet them as friends and treat them with hospitality. The crew members then learn about the ongoing war between Vectoria and Vectoria’. They also learn that the Vectorians can help them to get closer to earth, but only if they can win the war against Vectoria’. In order to do so, the vectorians must have help to expand the subspace of Vectoria’ that they are presently occupying in order to span the whole of Vectoria’ and challenge its ruling basis-kings. The crew members can help to do that by placing vectorians, who are line-men, in dimensions of which they are not yet aware. The problem is that no one knows quite how many dimensions that Vectoria’ contains. Clues to this fact are obtained by observing various orthogonal projections of what goes (= transformations) in Vectoria’ onto the subspace occupied by the immigrants from Vectoria.

They first study the restriction of a mapping \, V \rightarrow V' \, to the subspace spanned by the remaining immigrant kings of \, V . The number of these is given by the rank of \, M . The simplest description of a transformation will take place in a basis whose vectors only change their length when they are transformed, but whose directions remain unchanged by the transformation. Such vectors are called eigenvectors of the transformation, and the scale factor that changes the length of each eigenvector is called the corresponding eigenvalue of the transformation [Ref].

3 thoughts on “The Linear War”