This page is a sub-page of our page on Discourse Algebra.

1. Spacification of Discourses between Agents

Why would we want to “spacify discourses” that involve different (human and non-human) agents and create a discourse space? The reason is that such a space would provide a common background (= space) that is rich enough to include every single thread of discourse, i.e., everything that has ever been, is being, and will ever be expressed. Upon this background, any particular combination of discourse-threads can be positioned (= placed). Hence, as always, the reason for spacification is to explore different possibilities for placification.

The model that we will use to describe ”stories and other things” is depicted in Figure 4. In this model, Things are named entities that are experienced by humans either as phenomena that are part of the physical world that we perceive, or concepts that are part of the cognitive or mental world that we conceive. As described in Figure 4, stories are about things, but, at the same time, stories are (conceptual) things that belong to our mental world. This fact constitutes one of the challenges that confronts us when we are modeling stories. 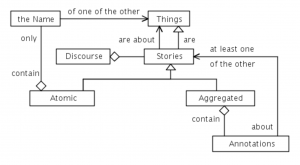 The model displays two kinds of stories: atomic stories and aggregated stories. Aggregated stories contain annotations about at least one of the other stories. Atomic stories contain only the name of one of the other things (i.e., some thing that is not a story). Hence, an atomic story can be regarded as a representative of the non-story thing that it names.

If we break up an aggregated story into its input elements, and continue to do so recursively, we will – after a finite number of steps – end up with a finite number of atomic stories. They constitute the elementary building blocks of our initial, aggregated story. As the discourse evolves, new things come into existence by being given new and unique names. A new thing therefore enters the discourse through its corresponding atomic story.

3. Stories as mappings between named things and situated expressions

The expressions within a story \, S \, – written \, E_{xpr}(S) \, – are the ”substories” added by \, S \, , as well as the substories referred to from within \, S \, , i.e., the ”expressions of mentioning” within the stories over which \, S \, is (recursively) aggregating. \, E_{xpr}(S) \, is also a finite set of named things. However, it also carries additional structure because mentionings are situated. Within the same story, things are often mentioned several times – usually in substories that take place within different contexts.

Using postfix functional notation for storytelling, we can write this relationship as

A discourse is a set of stories that are connected in some way. In order to model a specific discourse, it can be useful to represent it against a background of all the discourses that have ever taken place. These discourses form a (very large but finite) graph that we could call the Universal Discourse Graph ( \, U_{DG} \, ). The nodes of this graph consist of all the stories that have ever been told, and the arcs consist of the ”about-references” between them – showing which story is talking about what (see Figure 5). 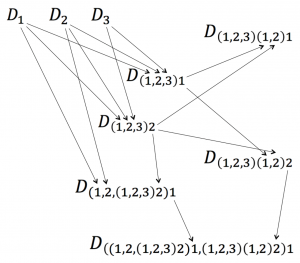 Connecting back to the discussion in ch. 3.2 we can write:

Here the “curved inequality signs” indicate that \, T_{hings} \, is not a set – but somehow ”larger” (= more inclusive) than the sets that are smaller than it. The subset inclusions between the supports and expressions of \, S \, and the \, U_{DG} \, are valid if we think of the \, U_{DG} \, as becoming ”instantly updated” whenever a new story is created.

It is important to observe that stories are referencing each other “in reverse order” with respect to their “time order” (= order of creation), reflected in the arrows of Figure 5, since newer stories must by necessity be referencing older stories. Hence, by reversing the order of the arrows in Figure 5, we arrive at a reference-based representation of the corresponding discourse, which we will call the Universal Reference Graph ( \, U_{RG} \, ). Just as the \, U_{DG} \, reflects the order in which stories are created, the \, U_{RG} \, reflects the order in which stories are referencing each other.

Each story \, S \, has a reference graph that consists of the sub-graph of stories that it is referencing (directly or indirectly – as encoded in the collection of meta-nomials of \, S \, with respect to each atomic story that \, S \, references. These are precisely the stories that can be reached by following the arrows that are starting from \, S \, to their “atomic” endpoints. The reference-based representation of the discourse of Figure 5 is depicted in Figure 6.

7. Placifying a story within the URG

Every individual story corresponds to a subgraph of the \, U_{RG} \, . Moreover, every aggregated story \, S \, contains substories that correspond to subgraphs of the full ”story-graph” of \, S \, .

8. Paths of reference: the meta-nomial of a thing with respect to a story

If we think of a story about something as a meta-thing, we can introduce an interesting way to describe stories. Let us assume that the thing we are talking about is the mountain called ”Mount Everest”. Hence we can write, for example:

We can now introduce the meta-nomial of a t_{hing} \, with respect to a s_{tory} that references it:

In summary, the meta-nomial encodes the paths of reference of all the different ways that a given s_{tory} is referentially connected with a given \, t_{hing} . These paths of reference are embedded within the \, U_{RG} \, , which provides a background (= a space) upon which all possible stories can be positioned (= placified). 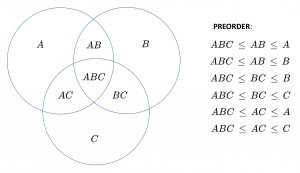