This page is a sub-page of our page on Political Modeling.

The quality of the public discourse is one of the basic pillars upon which a living and informed democracy rests. Today this quality is increasingly being challenged by a number of interconnected activities that affect the way we perceive what is going on in the world around us, as well as how we interact with our fellow humans (and, increasingly, with our fellow robots).

• It is no coincidence that trumpification is a word that seems to be on everybody’s lips these days. But in fact different forms of trumpification have been practiced since long in many places. Under the general name of dumbification, or “dumb down” as it is often called within the description/annotation (=metadata) community, The dumb-down process represents a coarseification (as opposed to a refinement) of the granularity and complexity of the discourse.

• It is no coincidence that so called “social media” are increasingly seen to be promoting asocial behaviour. Technologically-enhanced trumpification is bound to reinforce ‘trollification’, e.g., when you have to limit the size of your expressions to 140 tokens.

• It is no coincidence that the present “post-truth” media logic is emerging hand-in-hand with the process of trumpification. In a world where filterbubbles are increasingly separating our worldviews and turning them into “confirmational cliques of sameness,” our shared conceptions (= models) of what is going on in society are rapidly fading, or, rather, they are cracking up into an uncoordinated cacophony of frustrated and angry voices.

George Soros, in his book “What is wrong with America?” (Soros, 2006, pp. 91-92) expressed the following piercing insights regarding the process of (what we now call) trumpification:

(1) In dealing with nature, the truth is paramount. We need to understand how the forces of nature work in order to exploit nature to our advantage. Knowledge of reality is a precondition of success. In human affairs, there is a shortcut to success. We can impose our will on other humans directly, without going to the trouble of pursuing the truth. In these circumstances, we cannot take it for granted that the truth matters. Here is a weakness in the concept of open society that was not previously apparent.

(2) [As pointed out earlier] the underlying idea that reality is independent of what people think is inappropriate when reality has thinking participants. That is the point I was trying to make with the concept of reflexivity. Thinking is part of the reality we seek to understand. As a consequence, our understanding has to fall short of knowledge, because we lack an independent criterion by which the truth of our statements can be judged.

(3) In these circumstances, why should we pursue an unattainable truth instead of manipulating the truth to our advantage? That is the question I failed to ask, and it took the reelection of President Bush to make me aware of it. For whatever reason, I am passionately committed to the quest for truth and I expect others to care about the truth as much as I do. But that was my personal bias, not a rational expectation.

• It is no coincidence that the power to concentrate over longer periods of time is diminishing, something which is most clearly visible in the dumbification of the mathematical discourse at the educational level – a discourse that is something of a “canary in the educational coal mine”. Moreover, TV shows have since long been teaching us how to effectively disconnect any thoughts that might appear between the ads. And in today’s hyperconnected “attention economy”, what little remains of our former attention span has to be protected by adblockers. In such a world, our capacity to concentrate over long-enough periods of time in order to be able to connect the dots between ‘now’ and ‘before’ is bound to take a beating. In short, the dumb-down resulting from TV ads and Google adsense are two of the major global drivers of what could be called “deconcentration by fragmentation.”

• It is no coincidence that the media industry is bewitched by emotional opinion and rock-n-roll journalism. “Opinion is opium for the present media,” Marx might have remarked if he had been alive today. “How does it feel?” is by far the most highly predictable question with which reporting journalists open their interviews – not only within the domain of sports, where this question seems to be mandatory.

The bullet list above can be made much longer, and it indicates an underlying pattern of drivers behind the challenges described above. Over time, the effect of this pattern of quality eroders has resulted in a form of emotionally based ‘opinionocracy’ (“tyck-och-tryck”) or ‘emotionocracy’ (‘känslokrati’), where public memory is short, emotions run high, and there is a lot of money to be made by “rocking the emotional boat” – as opposed to “connecting the conceptual dots”, which is considered to be far too boring and time consuming. The basic message that results from this strategy of “avoidance of the unpleasant” is that the world appears as a more and more scary and confusing place. But, luckily, the advertised products are “getting so much better all the time”, to borrow a classic phrase from the Beatles.

Schema for an Emotional Opiniocracy

In an opinioncracy, the opinion polls are directed from the politicians to the voters. Politicians, and underlying powerhouses request opinion polls. They are managed by the (polling) Institutes, who sample the opinions and feed back the results to the Media, who then inform the public and hence the Politicians who then adapt to – or at least are seen to be adapting to – the Voters’ opinions. Meanwhile, the opinionated discourse on social media goes on in parallel, increasingly driven by emotion. When our messages are limited by 280 characters, we often feel that we have to “punch fast and hard”, which tends to promote brutish and hateful behaviour. 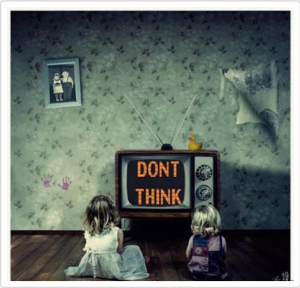 Over more than two decades, and funded mainly by different EU projects, the author and his research group (the KMR group) have been working on developing and testing techniques and tools that have been designed to enhance the communicational quality of the public discourse in various ways. We believe that the resulting processes and tools for “communicative modeling” and “learning conversations” can act as a starting point for an effective and efficient response to the processes of quality erosion of the public discourse discussed above.

Our modeling methodology has been based on the concept of a knowledge manifold which was introduced in (Naeve, 1997) and developed further in (Naeve, 1999 and 2001a). A knowledge manifold can be regarded as an information atlas of interconnected information landscapes, called “context-maps”, which consist of patterns of interconnected concepts that can be navigated at different levels of granularity. This makes it is possible to obtain an overview of a knowledge domain without losing contact with its underlying (deeper) levels of details and refinements. The concepts can also be provided with content, which can be universal (= independent of the context) or contextualized (= dependent on the context). “Content in Contexts through Concepts” is the major design principle involved here.

Traditionally, knowledge representations (such as taxonomies and ontologies) have been constructed top down (= in a cata-logical way). Hence they have tended to become normative “knowledge unifolds” (“kunskapsenfalder”) that have been heavily backed by various authorities – most often the king/state and/or the church – who have had a lot to gain from upholding them.

Today, technology not only enables – but, in contrast to earlier, substantially facilitates – contextualized knowledge representations/patterns to be constructed from the bottom up (= in an ana-logical way). Our aim is nothing less than to provide a formal ana-logical transformation language, as well as a tool-supported methodology, for connecting locally structured thoughts into patterns and instantiate these pattern with examples, where each example conforms to (= is coherent with) the rules and restrictions laid down by the pattern from which it was constructed. In database theory, such a pattern (of rules and restrictions for the entries of the database) is called a schema, and to populate the database is to instantiate its underlying schema. In linguistics, the grammar of a language works as a schema pattern, and, if a linguistic expression is “grammatically correct”, it represents an instantiation of this schema.

Schema for a Reasonable Visionocracy

In contrast to the opinion polls, which are directed from the politicians to the voters, the “vision polls” of a visionocracy are directed from the voters (via questions) to the politicians, possibly – but not necessarily – mediated and managed by the institutes as requests that trigger them to poll the politicians and inform the media about the sampled results. Meanwhile, this “visionary discourse” goes on in social media, causing everyone to evaluate the effects of their visions, and modify their expressions of them accordingly.

Using the knowledge manifold model, we can “build upwards” by connecting individual knowledge patches within different (and explicitly modelled) contexts (handled by Conzilla) and with different forms of contextualized content (handled by Confolio).

The process of modeling and negotiating such “knowledge connections” is called knowledge negotiation, and the resulting agreement is called a knowledge contract. Knowledge contracts will be authenticated by using localized (and therefore smaller) versions of block-chain-based technology. We will probably modify the Ethereum code, which is open source. In the spirit of the Animals from 1968: “Oh lord our intentions are good, please don’t let us be misunderstood”, we might add “by helping us to express ourselves as coherently and unambiguously as possible.”

Working in this way, we aim to instantiate several socially important bottom-up knowledge-building processes through our MATCH transformation process.

In order to achieve effective and efficient representations, it is of fundamental importance to take into account that the targets to be represented, i.e., the interacting processes and products, are interconnected through different patterns that determine the structure and the dynamics of their interactions. The “canonical language” for expressing such patterns, as well as the ana-logies (= functors) between them, is category theory, and we aim to make use of this language (with which we are thoroughly familiar) to its full potential. An especially powerful application of category theory is provided by databases, where, for example, the process of populating a database can be seen as a functor.