Anchors into the text below

• ‘algebra’ versus ‘an algebra’

Emmy Noether: The Newton of Algebra and the grandmother of Category Theory:

What is ‘algebra‘ and what is meant by ‘an algebra‘ ?

By the collective (= non-plurizable) term ‘algebra‘ one usually means the domain that studies all forms of different computational systems.

Definition: In this context the expression ‘an algebra‘ will refer to a computational system involving two operations where at least one of them distributes over the other.

REMARK: In a boolean algebra both operations have this property.

The operations of an algebra will are called ‘addition’ and ‘multiplication’ and denoted by ‘plus’ ( \, + \, ) respectively ‘times’ ( \, * \, ). The distributive relation between addition and multiplication can then be verbalized as “multiplication distributes over addition” and ‘formulized’ as

The (commutative) algebra of polynomials in one variable with real coefficients.

A typical element of this algebra, a typical polynomial of one variable, can be expressed as

Geometrically this corresponds to changing the direction of the surface normal.

The Clifford conditions are given by

From the associativity of the geometric product, and from its antisymmetry on the pairs of basis vectors \, e_1, e_2, e_3 , it follows that:

1): The polynomials of vectors that appear in any clifford algebra
are called multivectors.

2): The number of vectors that appear in each term of a multivector
is called the degree of the term.

3): If each term of a multivector has the same degree
the multivector is called homogeneous.

FACT 1: In any clifford algebra, the geometric product of any set of basis vectors
produces a pseudoscalar. Moreover, any two pseudoscalars for the algebra
differ only by a scalar factor.

FACT 2: A pseudoscalar dualizes every multivector that it operates on by multiplication. 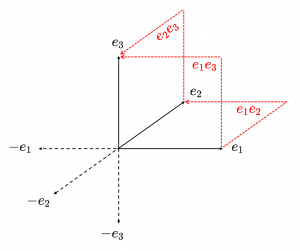 This diagram shows the 1-blades (unbroken black arrows) and the 2-blades (red, dotted, broken arrows) among the blades in the canonical basis for \, C_l(e_1, e_2, e_3) .
The negatives of the 1-blades are shown as dotted black arrows.

Example 3: The complex numbers represented as the even subalgebra
of the clifford algebra \, C_l(e_1, e_2) \, over the real numbers \, \mathbb{R} :