In July 96, I went to California for a month. I continued thinking about the structure of the GOK - as well as to gather more information. During the summer I realized that there should be a third mode of operation (= state) in the garden - apart from the rational and the random - namely the esoteric (? spiritual) mode [Figure (27)]. In this way the program would incorporate the fundamental difference between the material (? exoteric) and the spiritual (? esoteric) way to look at the world - thereby contributing towards bridging the devastating gap between science and humaniora. [Compare Figure (7)].

As a 'humanist' it is just as confining to try to conserve your ignorance of technological and scientific matters, as it is for a 'scientist' or an 'engineer to try to ignore philosophy and history of ideas. The important point is that there should be 'room enough' in the GOK in order to allow the new generation of students to develop their own world-views in a non-biased way.

Back from California, I pursued the esoteric trail. Manly P. Hall's classical work [(66)] was my main source of reference. I collected text material and classified articles according to their relations to the elements and phenomena - as pictured in Figure (27). I consulted Koestler [(91)], Murchie [(106)], Heath [(70)] and several other 'gardeners' - well versed in the history of ideas.

I concentrated on three basic types of questions that could be asked about any combination of elements and phenomena - in exoteric as well as in esoteric mode. The basic, overview-question was the following: 'What is its material/spiritual nature?'. This fundamental question was then complemented with three different aspect-questions - namely, 'What does it consist of?', 'How does it behave?' and 'Why does it behave this way?'. I spent quite some time with the question of the nature of light - which is one of the most subtle questions that physics can ask. 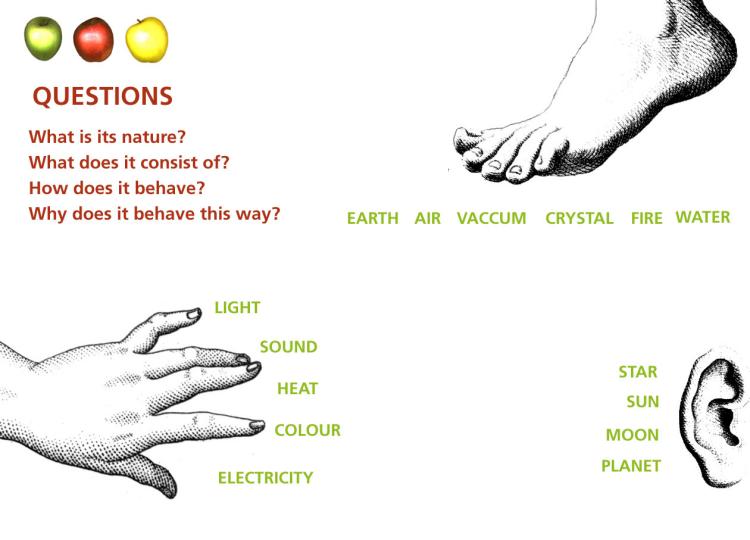 I wrote condensed descriptions with various basic configurations: light as particles, light as waves, light as photons and light as colors. I also formulated the corresponding types of questions and responses within the fields of heat, energy and work. The aim of this activity was partly to illustrate the nature of physics, but first of all to show by example how a collection of scientific insights might be organized in order to provoke student interest. In this activity, I started from the content and made use of the traditional text-medium - well aware of the fact that the 'multi-medial dimensions' would be added later. I wanted to have a rather large collection of raw-material content to work with later, when we were going construct a first prototype.

During the summer, our graphical designers - Klara and Kristina - had worked out several interesting suggestions for shapes and symbols that would appear in the GOK. At this time we were looking for some kind of 'icon-language', a way to graphically represent the various elements and phenomena, whose combinations we wanted to describe and explore.