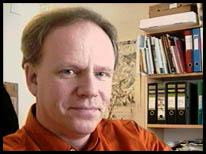 He has many years of experience from companies working with radio and television production. From 1992 he has been educating engineers for the broadcasting and the graphic arts industry. He has been a member of the KMR group at CID, NADA from 2001.